Subscribe to Words of Grace through Google Email Feed

The handwriting was on the wall.

God had spoken.  And it wasn’t good news for the king and his minions. 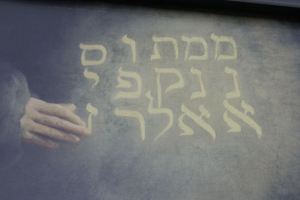 God has numbered the days of the kingdom, the king has been evaluated and found deficient, and the kingdom would be given to another empire.  That night.

What was the great sin of the Babylonian king, Belshazzar?  Apart from the foolishness of not learning the lesson about hubris from his grandfather, Nebuchadnezzar, the sin that brought the instant judgment of God was ingratitude. That’s right.  Belshazzar was judged for a lack of thankfulness.  Listen to Daniel’s account of what happened that night:

Belshazzar indulged in a drunken party and used the vessels that had been designed for the worship of God to serve his bacchanalia.  And they praise the gods of gold and silver, of bronze, iron, wood and stone. In other words, praise and gratitude that is reserved for God was given to that which is not God.  They expressed their gratitude for God’s good gifts to those empty idolatrous forms that were wholly incapable of giving anything.

Here we have another lesson in ingratitude.  Not only is ingratitude a sin because it is a violation of the command of God — “in everything give thanks…” (1 Thess. 5:18) — but it is also a sin because it attributes gratitude to someone other than God Himself.  The story of Belshazzar is a reminder that ingratitude is not just a failure to give thanks to God, but ingratitude is also demonstrated when we give thanks to the wrong person.  When we give ultimate thanks to anyone but God, we demonstrate that we are ungrateful to Him.  It is a way of saying that we believe that the good gifts we have received are not a result of the gracious and benevolent hand of God.

As we embark on a week of expressions of gratitude, we do well then to remember that thankfulness should always intentionally find its end and joy in God.  While being thankful to others and for others for their participation in our lives, we should recognize that everything we have, we have from God:

It is not enough to feel thankful for blessings received; there must be a definite expression of our thanks to God.  “Oh that men would praise the Lord for his goodness, and for his wonderful works to the children of men” (Ps. 107:8). [D. Edmond Hiebert, Working with God]