This week we have been reading the book of Joshua in our Bible reading plan.

The key person in the book other than God is Joshua, and it is important to remember that he was one of only two men who survived the 40 years in the wilderness due to his good report that the land could be inhabited and defeated (Numbers 13). God chose Joshua as the successor to Moses (Numbers 31:3), and it was Joshua therefore who led the people into the land. Jensen points out that

Joshua’s experiences in many ways paralleled those of Moses. Both were given charges to serve in leadership; both led Israel bodily from one land to another; both experienced the miracle of the parting of the waters; both gave moving farewell addresses; and when each died the people were at the peak of spiritual health, determined to serve the Lord. [p. 23.]

It has also been pointed out that like Moses, Joshua was also typical of Christ in several different aspects.

Joshua has typical significance for [Christians], prefiguring Jesus as the captain of our salvation. As Joshua led the people of God into the promised land and allotted their territories, so Jesus brings believers today into Promised Rest. [Rea, p. 710.]

Rea also goes on to point out that Joshua also typifies Christ as Intercessor, Advocate, and conqueror over sin (enemies).

Therefore, as the central figure in the book Joshua led the people to a closer relationship to God, and it was his own faithfulness to God that sustained them several times.

Read more about the book of Joshua here.

I’ve also put together a chart of the book: 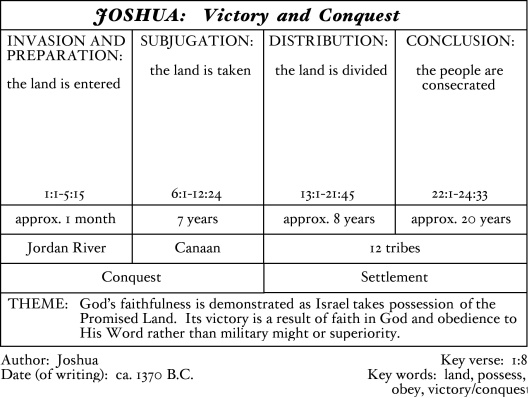