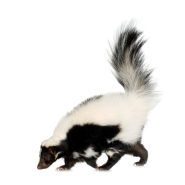 If only he had known. If only Dominican Republic native Apolinar Garcia had known the striped cat was not a striped cat but a polecat. He had no animosity in mind when he picked up the “cat,” but the cat misinterpreted his intentions. So Garcia, a pitcher for a minor league baseball team, not only received a lesson in zoology but also became instantly unpopular with his teammates. “Players had towels draped around their faces when he came in,” reported the clubhouse manager. And while they were able to get most of the smell out of his uniform, socks and cap, Garcia’s glove “might carry the memory of the encounter forever.” If only he had known.…

And if only we would know. If only we would know, the damage we experience through our failures would be minimized. That is why God warned through His prophet Hosea, “My people are destroyed for a lack of knowledge” (4:6). But they didn’t have to be, and we don’t have to be destroyed. No one needs to suffer self-destruction from ignorance, because God has told us what we need to know — many times over. In fact, some 27 times the writers of Scripture use the phrase, “do you not know…” These are the reminders. These are the ignorance busters. These are the life-savers. These are the words that will prevent us from giving up on God. These are the words that will keep us from destroying our lives and our testimonies. Consider just a few of them.

Do you feel forsaken, lost, left behind, alone? Listen. “God has not rejected His people whom He foreknew. Or do you not know what the Scripture says in the passage about Elijah, how he pleads with God against Israel?…In the same way then, there has also come to be at the present time a remnant according to God’s gracious choice” (Rom. 11:2, 5). Did you hear it? Believers today are no more alone than Elijah was in his day. Oh, he thought he was alone, destitute, and forgotten. But as God reminded him, when you are in the midst of a crowd of 7,000 faithful followers of God, it’s hard to be lonely. And God reminds us through Paul that even today God still has His remnant. Do you not know…there is no reason to be lonely!

Do you feel insignificant, unimportant, and immaterial? Are your contributions to life inconsequential? Listen again. “Do you not know that you are a temple of God, and that the Spirit of God dwells in you?” (1 Cor. 3:16). And then, “Or do you not know that the saints will judge the world?” (1 Cor. 6:2). Are you insignificant? Hardly. In the Old Testament God had one dwelling place on earth: the Holy of Holies in the temple. That was it. He refused to live anywhere else — and not only in no other building, but also in no other person. Not in Abraham, the father of God’s chosen people. Not in David, the man after God’s own heart. Not in Isaiah, or Jeremiah or Ezekiel or Daniel or any of His prophetic voices. No one. But now, Scripture says, He chooses to reside in every single person who is His own. And not only that, but He promises that when we believers are in His eternal presence, we will rule the world with Him. Astounding. Do you not know…you are not insignificant!

Do you feel the heavy gravitational pull of Satan down into the depths of his sin? Are you thinking that the small indiscretion will not damage? Listen. “Or do you not know that the unrighteous shall not inherit the kingdom of God? Do not be deceived; neither fornicators, nor idolaters, nor adulterers, nor effeminate, nor homosexuals…” (1 Cor. 6:9). And, “You adulteresses, do you not know that friendship with the world is hostility toward God? Therefore whoever wishes to be a friend of the world makes himself an enemy of God” (James 4:4). The reminder of the Word is that not only will sin damage, but a life of consistent disobedience to God not only demonstrates a lack of a relationship with Him, but demonstrates an attitude of hatred against Him. Do you not know…the fleeting pleasure of sin is not worth its eternal cost!

Do you feel like giving up? Are you tired? Does quitting seem like the best option? “Do you not know that those who run in a race all run, but only one receives the prize? Run in such a way that you may win” (1 Cor. 9:24). There’s only one way to live life, and that is to win. No quitting. No giving up. No crawdading. But you’re tired, you say? You may be, but the God who is your joy and strength isn’t. “Do you not know? Have you not heard? The Everlasting God, the Lord, the Creator of the ends of the earth Does not become weary or tired. His understanding is inscrutable” (Is. 40:28). Do you not know . . . He will strengthen you most when you feel like continuing the least!

If only we had known. The pain would not have been as deep, the destruction not so devastating, the temptation not so strong. And now, through the grace of God and His Word, we do know.