Larry Walters had always dreamed of flying, but because of poor eyesight was unable to get into the US Air Force.  So he made his living with another kind of transportation service — driving a truck.  But he would still frequently think about flying.

At some point, he came across the story of Al Mingalone who in 1937 tied 32 weather balloons to a parachute harness, put on the parachute and ascended to about 700 feet in altitude and shot some footage for Paramount Pictures.  The story made Larry Walters think, “I wonder…” 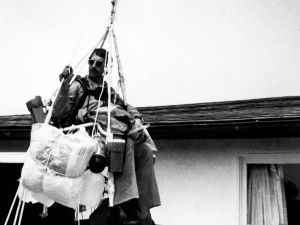 So in 1982 Larry purchased 45 balloons and on July 2 he filled them with helium and attached them to his lawn chair, tied ballast to the chair, grabbed a pellet gun, some sandwiches and a two-liter coke, a CB radio, and a camera, climbed into the chair, and his friends cut him loose.

He ascended quickly — to 16,000 feet and federal airspace and the flight descent path for LAX.  Though he eventually dropped his pellet gun, after 45 minutes he was able to shoot out enough balloons that he began descending and landed 45 more minutes after that.  Reporters quickly gathered around him and asked him the obvious question — “Why?…”  He responded, “It was something I had to do. I had this dream for twenty years, and if I hadn’t done it, I think I would have ended up in the funny farm.”

He couldn’t just sit there anymore.  He had to act.  There comes a time when a man has to act.  And there comes a time when the man of God must act.  When we consider what we have in Christ, and the goal that Christ has for us, we cannot be apathetic about our salvation.  We need to act on our salvation, which is what the Scriptures teach in multiple places, and is Paul’s emphasis in Romans 13:11-14 —

It is time to intentionally act on the salvation we have been given.

In this passage, Paul calls us to three actions and provides us one extended motivation for our actions.  We will consider the first action, and the motive for acting this morning, and the final calls to action next time.

The audio will be posted on the GBC website by tomorrow.