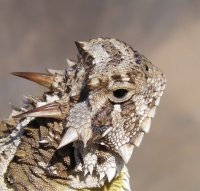 When the creature is threatened by a large predator, it runs through an elaborate behavioral repertoire. First, the lizard will hiss and swell its body with air. If that doesn’t work, the animal will flatten its body into a dorsal shield and tip it up toward the attacker. The predator may decide that this little animal might just be too difficult to swallow.

That gives a whole new meaning to the phrase “If looks could kill…”!

There is within us a similar desire that is in the horned lizard — the desire for protection and self-preservation — that is manifested in a number of ways.  We all lock our homes whenever we leave them.  Many lock their car doors not only when they arrive somewhere, but also while they are driving.  Computers have passwords and security systems to prevent the wrong people from accessing information.  Our government provides police for civil protection and armed forces for outside aggressors.  You own a variety of insurance policies for financial protection.  Your furniture may be sprayed with Scotch Guard to protect it from food and drink spills.

Yet our greatest need for protection is not against external forces but from inward desires.  How can we guard ourselves against our fleshly propensity and yearning for sin?  Peter gives an extended answer to that question in 1 Peter 4:1-6.

First of all, we guard against sin by preparing for the battle (v. 1).  Just as Christ prepared Himself for His suffering, so the believer prepares himself not to sin (and notice Peter’s point at the end of this verse that the believer need not sin).  The believer arms himself:  he puts on the armor given to him by God.  And unlike Saul’s armor which did not fit David well for his giant battle, this armor fits us perfectly.  It equips us exactly with what we need to defend ourselves against sin’s attacks.  And part of that armor is a particular purpose.  That is, the believer prepares himself for battle by cultivating his mind with biblical thoughts.  He thinks on and has a resolve to fulfill what God has purposed for him (purity amidst the attack).  He understands (v. 2) that while he lives fleshly (he has a human body), he need not live lustily (sinfully).

Secondly, he remembers his calling (v. 2).  He may still battle ungodly desires on a daily basis, but he has a new will to follow.  God has determined a new course for him and enabled him to follow that course.  Prior to believing in Christ, he could not obey Christ, but now he can.  Now his life purpose is to obey God’s will and decree (v. 2) and to please the Lord (2 Cor. 5:9).  He resists the flesh by remembering and meditating on the fact that he has been created and redeemed for something different than fleshly indulgence.

To protect himself against sin he also remembers the judgment (vv. 3-5).  There is some measure of pleasure in sin.  People sin because they find greater pleasure in it than they do in obeying Christ.  But for the believer, he has a new mind and a new desire and those fleeting pleasures are past (v. 3).  Now the believer realizes that whatever momentary pleasure may be experienced in sin is of no comparison to the judgment that awaits those who continue in their sin without Christ (v. 5).  There is a day of judgment coming.  That day will certainly arrive and it will be horrid beyond our current comprehension.  No sin is worth the cost that will be paid on that day.

And finally, to guard against sin, the believer appropriates the power of the gospel (v. 6).  Why has the gospel been preached?  For this purpose:  so that while men are still fleshly (human), they can live spiritually (under the power and control of the Spirit of God).  In other words, the gospel is powerful enough to free us from the powers of sin’s temptations.  The gospel enables us to obey God’s will and commands.  What He has called us to do, God also enables us to do by the daily work of the gospel in our lives, as Peter has already taught:

As you leave your home this morning, be aware of the battle that awaits you; and prepare for that battle by availing yourself of all that God has provided for you.