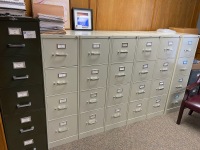 For those of you who have been to my office, you might have noticed a bank of file cabinets outside my office.  Those are my resource files — Bible books and topics.  And I also have a large digital file on my computer.  One of the files that seems to be growing the fastest recently is my “Politics and Faith” file.  On Friday afternoon I found 134 articles in that digital file alone (I have no idea how many are in the cabinets).

It actually was just a little discouraging to go back and read through some of the article titles:

And I haven’t mentioned anything about abortion issues, homosexual marriage, doctor-assisted suicide, eugenics and bioethical issues in the courts, court cases against florists and bakers by homosexuals who alleged discrimination, or a host of other topics about the intersection of government, people, and Christ.

Does the Bible speak to what we should think about government?  It does.  It is explicit about what we should expect from our leaders.  Romans 13:1-7 provides several key principles for governments:

Every government is established by God to carry out His purposes.

In these verses, Paul affirms four realities about the position and role of government and leaders:

Today’s question is:  What is the government’s role and what does God expect of government and its leaders?

The audio will be posted on the GBC website by tomorrow.